Wall Street is synonymous with many things: fortunes lost and won, protests and prosperity, greed and good. In addition to the Gordon Gekko allusions, Wall Street’s rich history stretches back to the early days of our country. On Uncle Sam’s Alexander Hamilton Financial District Tour, you’ll stroll through much of this history while learning about the building blocks of our modern economy.

This guided walking tour leads from Battery Park and its excellent view of the Statue of Liberty to the skyscraper canyons of Downtown Manhattan. Dive into early American history as you visit Fraunces Tavern: It was here, in 1783, that George Washington said farewell to his troops at the end of the Revolutionary War.

Nearby, you’ll see the place where Washington was inaugurated: Federal Hall, the national memorial that stands on the site of the first U.S. capitol building. You’ll also see the final resting place of Alexander Hamilton, first secretary of the U.S. Treasury.

After experiencing the rich history of the Financial District, you’ll see elements that have propelled the city into the modern era. Check out the world’s largest stock exchange: the NYSE, where more than $150 billion is traded every day.

Revel next in the Canyon of Heroes, a name for lower Broadway in the Financial District, where tons of confetti over the years have greeted ticker-tape parades for sports teams, astronauts and returning GIs. 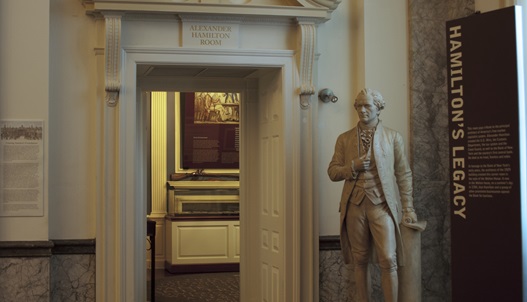 As America’s first Secretary of the Treasury, Alexander Hamilton stands alone in the annals of American financial history. One of the founding era’s key political figures, Hamilton’s influence on our fledgling country’s early finances set the wheels in motion for the United States to become the economic super-power it is today laying the foundations for the U.S. capitalist system. This exhibition traces Hamilton’s life from his birth into poverty in the Caribbean through his rise to military and political greatness in America, becoming America’s premier economic thinker. As the first Secretary of the Treasury, he saved the new nation’s credit, established plans for funding our new country’s debt, created a national bank, and used the tax system to encourage economic development – all ideas considered “radical” by most Americans of the time. Hamilton also founded the Bank of New York, New York City’s first bank that was located at 48 Wall Street until 1998.

The Museum’s Alexander Hamilton Room was designed in the federalist style in 1927 to pay tribute to the Walton House, where the Bank of New York first conducted business in 1784. The room originally served as the bank president’s office.

In this gallery, visitors will see documents signed by Alexander Hamilton, examples of his published works, and items such as medals and currency designed in his honor.

Did you know?
It is generally accepted that Wall Street got its name from a wall on the northern boundary of the New Amsterdam settlement in the 1600s, in what would become Downtown Manhattan.

Wall Street was the site of the first presidential inauguration, when George Washington took the oath of office on the balcony of Federal Hall in 1789.